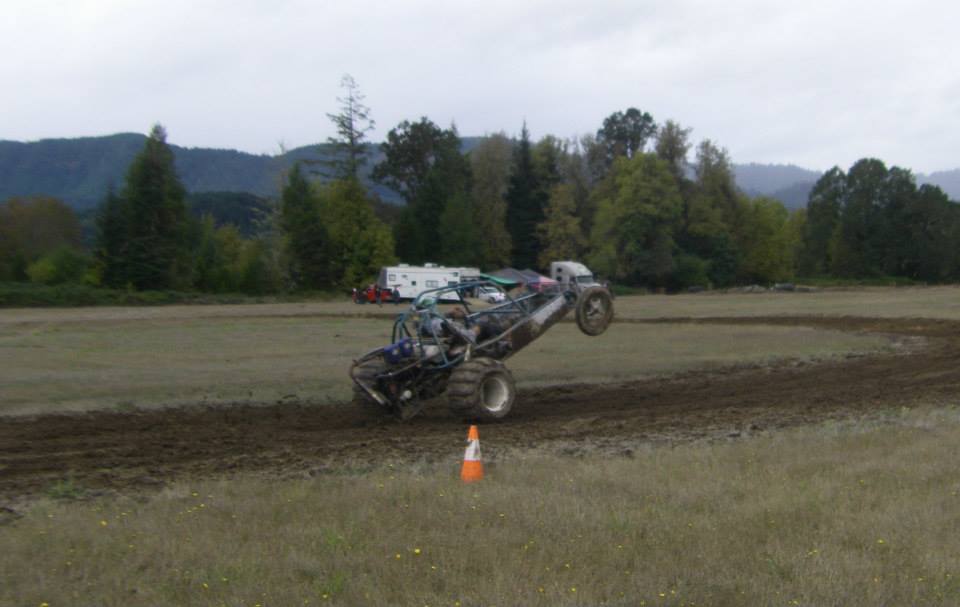 Camas Valley has a 4×4 playground that hosts various events throughout the year. We decided this was the perfect venue to test and tune our now finished “Project 180” vehicle. With virtually ZERO seat time in this car other than driving it around in the Trail Tough parking lot, we loaded it up and headed north.

Brent found out that he needs to practice shifting from 2nd to 3rd.  On the dirt drags he kept missing his 2nd to 3rd gear shift – hitting first gear instead of 3rd a few times…..YA…that’ll slow you down a bit…

He ran the 4 to 6 cylinder class and  he made it to the final pass and – well he missed  2nd to 3rd shift. Then he paid an extra 5 bucks to go up a class and ran with the V8’s.  There were about 30 rigs in this class and he made it through the double elimination process down to the last 6….Very impressive…
So before the barrel racing event he decided to take the car off to the side and try out shifting from 2nd to 3rd while in high range….well that was a disaster because the clutch did NOT like that and he toasted it.  He went ahead and did the barrel racing – it cornered and handled wonderfully and the clutch – while it was smoking – withstood it for the 2 runs, not sliding in the rear enough to win. So Brent’s wheels are spinning again and he will probably install Trail Tough Brake lock valve kit to enable him to lock out the brakes on the right side to achieve tighter cornering.

On the flat track there were no classes.  Stock, Modifieds, 4 to 6 cylinder, V8, and buggies all ran together in one big lump. Brent missed more of those 2nd gear to 3rd gear shifts – pounding it into 1st gear kind of like slamming on the brakes. Each driver was allowed 2 runs.  Even with having to run against these powerful V8’s,  Brent finished within a fraction of a second of the first and second place winners, finishing in 3rd place. Times:

Wheel to wheel racing was the final event of the weekend and Brent got his arm twisted into trying it. Unsure how the clutch would fare, he said ok.  Three laps around the track wheel to wheel was the objective. Brent just checked out on them and led the entire 1st lap by a large margin until the clutch finally gave out and he had to limp it off of the track.

All in all, the car handles incredible just like a go-kart and keeps up with the best of the best of the high powered rigs due to the suspension, the engine – gear ratio combination, and power to weight ratio.

Next time he will try Trail Tough’s “Vulcan” metallic clutch instead of the Centerforce Dual friction that he decided to switch out at the last minute and was not able to adhere to the 400 mile break in requirement. He’s got a plan to massage the shift rail ends for a more positive 2nd to 3rd gear transition. And a brake lock valve for the right side wheels in order to skid steer tight around the barrels.

Even though he didn’t win the first time out, Brent is very optimistic and excited for the next race!